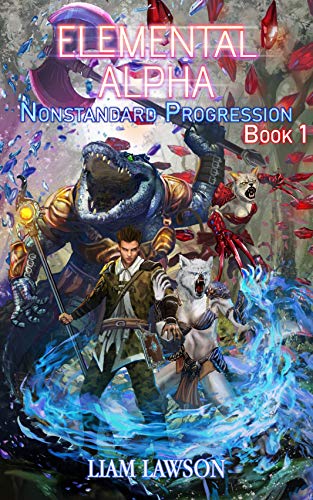 NOTES FROM THE AUTHOR: “When I was writing this, I envisioned an “old world” sort of aesthetic. Like colonial America or Brittain in the 1800’s. No need for a European accent, but that might help finding a tone that fits.

Jerrell and Nadine are both, at heart, nobles and academics. Nadine more so than Jerrell, she’s actually been to the university and is a higher ranked noble. Jerrell, if put in our world, would probably be some kind of wildlife biologist. Both tend a little more toward a refined tone.

Rexnu…flirty and daring with a lot more casualness to her voice. When writing her I basically take the standard dark elf tropes and then put a cat brain behind them. ”

BOOK DESCRIPTION
Create lycanthropes. Give them elemental powers. Save the world.

Jerrell Hawkins has a plan. He’s going to marry Nadine Hartwell, study magic at University, and serve his kingdom in the ongoing war in the prestigious Orichalcum Company led by the hero of the realm. To do this, he needs to obtain a Class. When his plan to create a new, powerful spellcasting class fails, he fears all is lost. Then an enemy sleeper agent burns down his world and Nadine is infected with lycanthropy.

But Jerrell’s pursuit of a new Class leaves him with strange, controversial abilities. He can create and bond lycanthropes. What’s more, he’s learning to use elemental magic. Along with Nadine, now his bonded companion, he enlists in the military to enact vengeance for the destruction of their home.

Their enemies are numerous, their abilities make their allies uncomfortable, and nothing is simple. Not even the fate of the world, which just might rest on Jerrell Hawkins’ shoulders.