AUDITION NOTICE: PLEASE READ BEFORE AUDITIONING.
Each title is listed below. The due dates are rolling, so we will coordinate with YOUR schedule once you are cast.
Final files to be delivered as clean (light debreath, etc) PNR wav files with no mastering, no proofing. We will handle finishing. The rate is for you to prep and record.
To audition: Choose the title, record your audition and upload using the form below. You can audition for multiple titles, but do not put them all in one audition.
FORMAT OF FILE: mp3
FILE NAMING: TITLE_NARRATOR-NAME.mp3
DO NOT SLATE, DO NOT TRUNCATE THE AUDITION. If you can’t narrate 4-5 mins, you can’t narrate a full-length book. 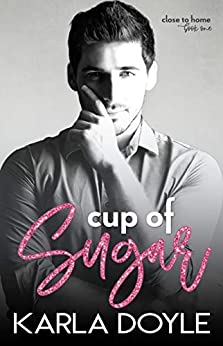 Description: Nia has one rule—don’t date neighbors. Simple, except the guy next door is single, handsome, and not inclined to close his blinds while naked. When her car dies, Conn takes “being neighborly” to a new level by offering a ride to her long-distance destination. Nia has resisted his looks and charm for months. Surely she can handle a few hours in his truck…

For months, Conn has blatantly put himself on display, hoping his pretty blonde neighbor would tire of secretly watching and come knock on his door for a cup of sugar—or more. No such luck—until an unusual opportunity arises. After a six-hour drive turns into a sweet-and-sexy weekend, Conn wants more than neighborly status with Nia. To get it, he must convince her to break the rule protecting her heart—by putting his on the line.

*hot contemporary romance with some explicit sexual content*
————–
NOTES: All characters speak in a General American style, with no accents.
Male main character / hero — Conn Lawler
• Conn is a thirty-one-year-old carpenter, a homebody who is close with his siblings
and parents, and loves his dog. Conn is determined and outgoing. He has a dirty-minded
sense of humor. Conn’s voice is deep.
Female main character / heroine — Nia Chambers (pronounced: knee-uh)
• Nia manages a large restaurant in a hotel. She is twenty-seven, and close with her
parents. She has an adopted sister (Sara) who has been her best friend since childhood,
but they’ve also had some tension between them since their young-adult years. Nia is a
hopeful romantic, but also an overthinker. Nia’s voice is soft, and average mid-range in
tone (not high, not low). 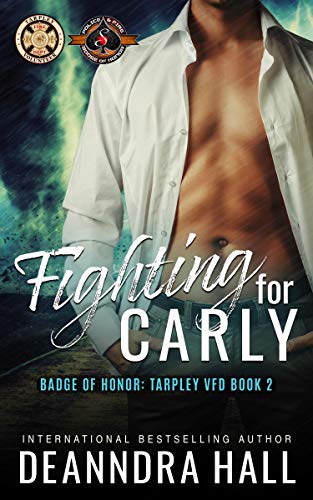 Description:The storm is over. The town is in shambles. And Carly is gone.Ross “Dub-step” McEvers has experienced his share of horrors. The woman he loved was killed in an accident. He almost died fighting a fire while working out of his station house in Corbin, Kentucky. Heading to Tarpley, Texas, to stay with his cousin while recovering from his injuries is all that’s on his mind. Meeting the love of his life in Tarpley? That would be about as likely as a typhoon in Nevada.But the curvy, gorgeous deputy sheriff who sends him plunging into the icy waters of a dunking booth at a local gathering blows into his life and his bed like a hurricane. Carly Cross’s life is rife with its own horrors. With an ex-husband who’s the county attorney and also best friends with the sheriff, the chances of the deputy ever making detective are slim to none. Worse yet, Carly’s afraid of what Eric Cross might do when he finds out she’s seeing Ross, and she has reason to be.The storm of the century devastates Tarpley and, as luck would have it, it’s the perfect opportunity for Eric to make his move. All he has to do is find a way to lure Ross into his trap and Carly will be his forever. When the dark clouds clear and day breaks, Carly’s gone. Even an army of FBI agents from across the country can’t seem to find her. Luckily for Carly, an angry Ross is a force of nature, and he’ll flatten everything in his path until she turns up. He won’t stop. He won’t even rest.Tarpley thought that tornado was the biggest thing to ever hit their quiet little town. But they’ve never seen the thunder and lightning of a storm quite like the one that’s about to hit them, courtesy of Dub-step McEvers. 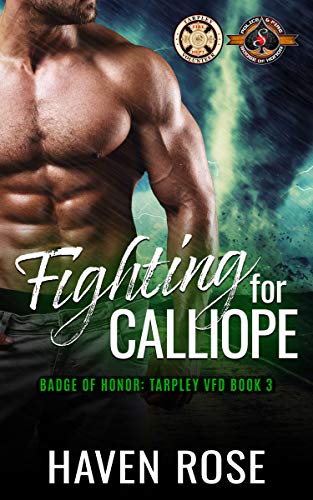 Description:Their hearts aren’t the only thing in danger…Will Calliope break through Tank’s defenses?I hurt those I love, so I’ve closed myself off to all possibilities of finding it. That sounds dramatic, but my dad would be alive if it wasn’t for me. My mom didn’t get her HEA, so why should I? Twenty years later, dreams of that night still haunt me and let me know something bad is coming. With my history and position as a volunteer firefighter, I’m surrounded by tragedy. Then fate brings me Calliope, and I realize there’s still good in the world. But instead of fighting my fears, I might have to conquer nature to keep my soulmate.Can Tank protect Calliope from herself?After seeing the good my parents did while traveling the world as teachers, my dream was to do the same, but from a home base – something I never really had. However, I’ve learned adventure has its own appeal, and now, I chase storms. My family worries about the danger I’m in, yet they don’t know the secret I’m keeping. It’s not my job that may kill me. When I meet Tank, a man that makes me rethink everything I thought I knew about myself. Perhaps home isn’t a place after all.Suddenly, forever isn’t long enough… 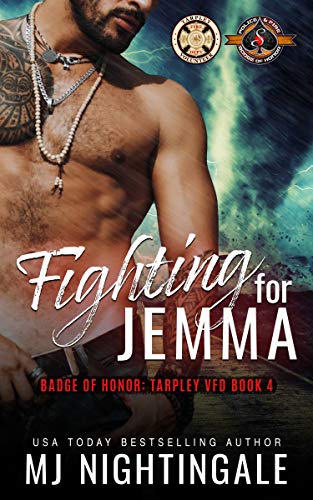 Description:High school science teacher Jemma Haner is ready for love, but she doesn’t do firefighters. Period. Never. No way. But Angel is everything she is looking for. Tall, dark, handsome and kind. As a veterinarian he shares her love of animals, nature, and the outdoors. She’d been burned in the past and had lost too much already to risk her heart to a firefighter.Angel, “Short Shit” to his friends with the Tarpley Volunteer Fire department, can rescue cats and kids out of trees without a ladder. He works hard and loves harder, but when he meets Jemma he thinks only of making her his. Only problem–she won’t date firefighters. Can he get her to change her mind and give love a chance? Can he win her heart?And when the storm of the century hits Tarpley, Texas, can Angel save Jemma from the dangers that come at her from all sides, and still do the job he loves? Find out in Book 4 of Badge of Honor: Tarpley VFD, part of Susan Stoker’s Badge of Honor series. 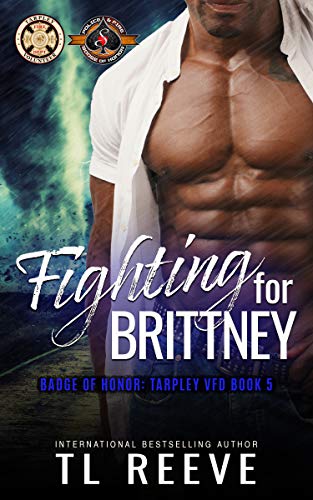 Description:Single mom and experience meteorologist Brittney Hart has spent her career saving lives and proving she’s more than a woman on the weather team. When she travels to Tarpley Texas with her best friend and Storm chasing teammate Calliope, running into her one-night stand that changed her life almost seventeen years ago was the last thing she expected. After two tours in Afghanistan, Navy veteran, Dexter “Dirty-D” Walsh has found a new calling, volunteering with Tarpley’s VFD as their paramedic. Seeing the one woman who rocked his world, years ago, brings back old memories. Only before he can get to her, she leaves, taking with her a young boy who reminds him of himself.When the storm of the century begins to brew Brittany follows her instincts, ignoring the doubters, and returns to the small town of Tarpley. She knows the chances of her running into Dirty-D are high, but it’s a small price to pay if she can warn the town before disaster strikes. Can she protect her son’s heart as well as her own, or will the storm snatch everything important away? 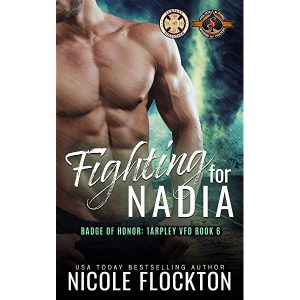 Description:A Fresh start. One Chance encounter. The storm of the century.Ex-Army surgeon, Mitchell ‘Buff’ Alexander has returned to his family ranch to try and rebuild his life. He lost a lot in the war, but not everything. He can still help at the Tarpley Volunteer Firefighter Department. Now, relationships, that’s a battle he’s not prepared to fight. He knows he’s better off alone. PTSD is the one thing Buff wished hadn’t followed him home. While in the throes of yet another attack, a stranger helps him in a way no other person has ever been able to. But she’s a complication he can’t deal with at the moment.ER Doctor, Nadia Fletcher wants more than this small town has to offer. She sets her sights on a dream job at a bigger hospital. After helping Buff through a PTSD episode, she wants to get to know him, but he won’t give her the time of day. As doors open and close, Nadia finds a new path and sees that the Texas Hill Country and the people might be what she needed all along.When the storm of the century hits their small town, Nadia and Buff reunite and work together to save lives, reigniting the spark between them. Buff wants to be the man Nadia deserves, but he’s drowning in his own hell. Will Nadia be the one to pull him to the surface or will fears keep them apart?