An emergency call to pick up an injured stallion on the side of the road sends Alexandra Hart, the new owner of Hart’s Horse Rescue, into action. A recent addition to the area, she is not impressed when the animal’s taciturn owner shows up. With his less-than-stellar disposition, he’s the kind of man she normally avoids at all costs—unfortunately, he owns the ranch just down the road.

However, when the manhunt for a pair of escaped prisoners gets a little too close for comfort, Jonas turns out to be a better neighbor than she expected.

The Alex who shows up at his ranch to help with his prize stud’s recovery is not exactly who Jonas Harvey expected. This is the same bleeding heart he met on the side of the road. Worried she’s not up for the job, he’d prefer to keep a close eye on her but his High Mountain Trackers team gets called in to track down a group of domestic terrorists.

But the slip of a woman proves him wrong. On all fronts. Alex not only charms his horses but him as well, and when trouble comes calling she proves to be a worthy ally to boot 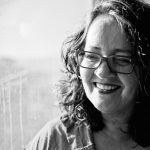 Award-winning author Freya Barker loves writing about ordinary people with extraordinary stories.
Driven to make her books about 'real' people; she creates characters who are perhaps less than perfect, each struggling to find their own slice of happy, but just as deserving of romance, thrills and chills in their lives.

Recipient of the ReadFREE.ly 2019 Best Book We've Read All Year Award for "Covering Ollie, the 2015 RomCon “Reader’s Choice” Award for Best First Book, “Slim To None”, and Finalist for the 2017 Kindle Book Award with “From Dust”, Freya continues to add to her rapidly growing collection of published novels as she spins story after story with an endless supply of bruised and dented characters, vying for attention!

Visit Freya’s website to learn more about her books and social media outlets.